The second day was dedicated to Entrepreneurs in the Silicon Valley. Each of the 12 teams of IMD EMBAs had a van. The day was organized into small team visits to three early-stage companies.

The first visit was to Sightech http://www.sightech.com/ which is a manufacturer of industrial vision systems for quality inspection and factory automation. They claim to have a powerful self-learning vision technology. All the technology is about machine learning, pattern recognition applied to computer vision. Their office is located in a large start-up incubator building.

The second visit was at San Francisco. We went to visit AirPlay airplay.com, a mobile-based video game start-up based on real-time televised events.

I asked Chris Bull (Vice-President of Marketing and successful marketing expert at Logitech, Microsoft) what he thought about the idea of TV being dead. According to him, TV is not dead, especially in the US. Traditional TV will probably die but a new interactive TV, TV2.0 if you want, is emerging.

The last visit was probably the most exciting on Klewel’s side, the visit to Vusion http://www.vusion.com/.

We met with Rahul Sharma (VP of Engineering) and Grover Righter (VP of Marketing). We had a brillant presentation by Grover Righter. It is quite impressive. They are building a HD video platform. They started presenting a bit of history of Silicon Valley. Innovation is happenning in waves: 1990’s web1.0 with ebay, amazon, yahoo, google. 2000 with hardware. 2005 with web2.0 and now it is on video on the web. Vusion is fousing on the internet video market. In terms of demography target, the 18-24 generation is driving the demand. My question: “Is TV dead?” Their answer: Np but TV program slots are dead. Physical media is dead. Vusion launched their product in May 2008. Their customers are media companies, movie studios. They claim their technology to be scalable, much lower cost, high quality. They expect to enter the Live market in 2009 and the challenge of Internet video is monetization. Vusion claim to provide the best user experience, with true HD video. They have a media business model. Compared to their competitors, they provide cost efficiency and a monetize API.

Two other start-up companies of interest were KyteTV and MonoLab among many others.

The day ended up at the Thomas Farty winery for an IMD Alumni Cocktail. 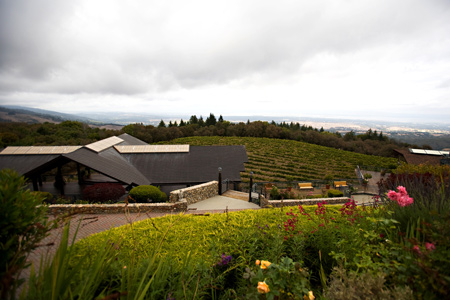